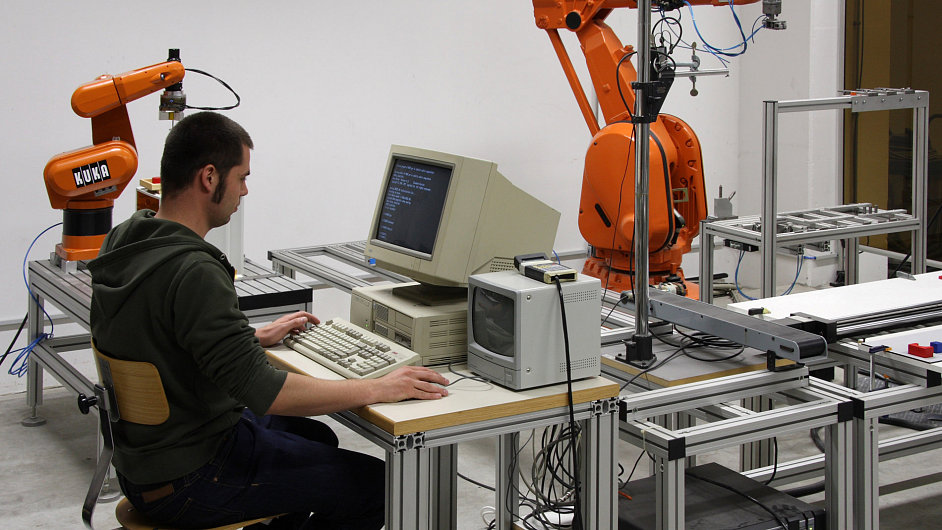 The robots are coming. Resistance is futile. From car factories to microprocessor plants to fulfillment warehouses, a single robot can now handle tasks that once took hundreds of man-hours to complete. This relentless march of automation is causing economic upheaval. As time goes on, companies will become more productive and more efficient, but the amount of human labor required will decrease and the pay will be less. The sentient worker will be reduced to a relic of a simpler age.

This is what we’ve been told, anyway. To some economists, stubbornly high unemployment rates in the U.S. and Europe are at least partly attributable to the rise of machines. “There’s no question that in some high-profile industries, technology is displacing workers of all, or almost all, kinds,” wrote Paul Krugman in the New York Times on Dec. 9, adding that “many of the jobs being displaced are high-skill and high-wage.” Massachusetts Institute of Technology professor Erik Brynjolfsson, co-author of Race Against the Machine, says: “Robots are becoming more capable and skilled, and people with the same sets of skills are not as much in demand.” According to this view, robots aren’t change agents. They’re destroyers of worlds.

Yet the robot revolution doesn’t have to cause panic. While robots can claim some technological superiority over humans, even the most sophisticated machines have limitations. Automation will inevitably displace jobs, but it’s already bringing fresh economic opportunities as well. The last two decades have shown how technology can create industries even as it turns whole cities into has-beens. The ratio of jobs created to jobs eliminated by robots and where all the newfound wealth ultimately winds up are entirely dependent on how workers, businesses, and policymakers prepare for this new era.

History is punctuated with scares about automation, with industries rising and falling based on changing technologies. Toward the end of the 18th century, 90 percent of the U.S. population was involved in farming. Farmers now make up 2 percent of the domestic workforce because of innovations such as tractors and grain combines. Meanwhile, our modern economy includes people who make a living creating mobile apps, a profession that was inconceivable a generation ago.

More than any economy in the world, the U.S. has proven to be especially resilient in the face of massive technological change. Why should recent advances in robotics be any different?

One reason is the accelerating pace of change. “We have a growing mismatch between the speed of technological development and our ability to adapt to it,” says Brynjolfsson. Technological developments used to take time to work their way into society. The internal-combustion engine was developed in the latter half of the 19th century, but it displaced the horse as a means of transportation only some 50 years later. The World Wide Web, on the other hand, has upended industries in less than 20 years. Moore’s Law is faster than Otto’s cycle.

All that said, it’s too soon to write dirges for the humble human worker. In today’s workplace, there are still things that robots just can’t do. At Quiet Logistics, an order-fulfillment center for online retailers in Devens, Mass., 64 robots are used to move merchandise around the warehouse, but 330 humans are required to fold, package, and ship the products. Why not have robots do the whole thing? “People are really good at picking up things,” says Bruce Welty, Quiet Logistics’ chief executive officer. “It’s very difficult to get a robot to make the decisions required that a human makes to pick something out of a bin—particularly if there are many different things in that bin.”

Humans continue to have another advantage over robots: They remain a more flexible workforce. To handle this year’s holiday shopping season, Amazon.com hired 50,000 part-time workers. While seasonal, part-time labor is not something you can necessarily build an economy on, it’s worth noting that Amazon didn’t buy more robots, because you can’t hire a robot part-time (yet). What would additional robots do when demand receded? “Come January,” says Jim Tompkins, a supply-chain consultant, “all that automation’s going to be staring you in the face.”

This is the state of the robotic arts today: a point where humans and robots share labor, with robots handling the simple and repetitive and humans taking care of the complex and dynamic. Some robotics designers and engineers would like this to be a blueprint for the future, where increased automation does not necessarily displace human beings. Rodney Brooks, a former MIT robotics professor, is an optimist. To Brooks, who is also founder and chairman of robot maker Rethink Robotics, these machines are going to help workers, not compete with them. He points out that personal computers didn’t get rid of office workers, they changed the jobs people did. When it comes to robots, “it’s not a one-for-one replacement,” he says. “People are so much better at certain things.”