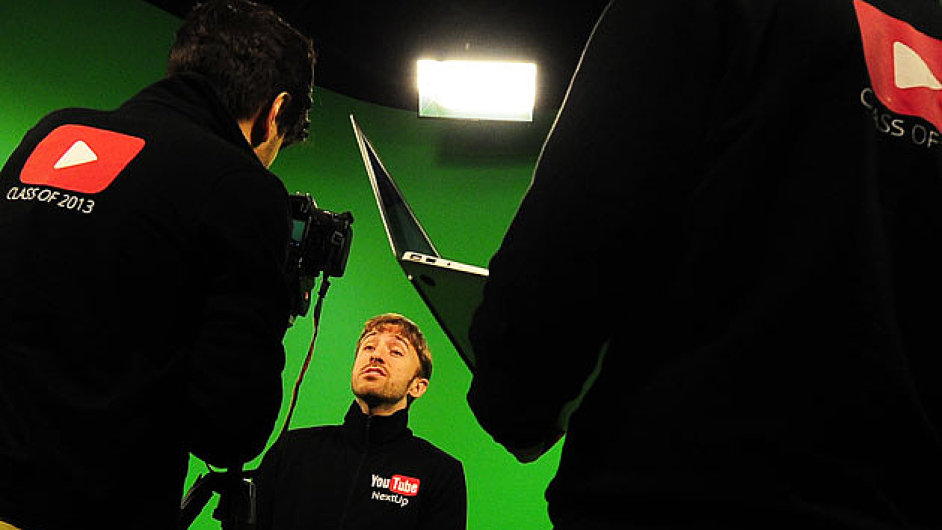 Videobloggers from across the country learn how to use production equipment at YouTube Space LA, a free facility created by Google to pamper its hardcore fans. autor: archiv
BSL: Business press angličtina

Despite success stories about YouTube sensations such as Jenna Marbles, the vast majority of the site’s users probably don’t think of it as a place to earn money. The video giant wants to change that. It’s trying to build a bench of talent that can support its ambition of competing with traditional TV. In the past year it has opened swanky new studios in Los Angeles, London, and Tokyo, launched more than 100 new original content channels, and made advances totaling more than $300 million to some of its top video makers.

For folks who dream of earning a living as YouTubepreneurs, the biggest change took effect last April, when the video site launched a new revenue-sharing program. Whereas before, creators who wanted to pair sponsors’ ads with their videos had to get YouTube’s permission, now the video platform has automated the process with a “monetize” button, essentially opening the flood gates to anyone who posts an original video. Creators get about half the advertising proceeds, according to industry analysts and video makers. (YouTube typically finds the advertisers, although creators can approach sponsors directly.) “If they can generate an audience, they can start making money,” says Tom Pickett, YouTube’s vice president of global operations.

The ensuing rush of fresh talent, including stunt master Devin Super Tramp, singer Sam Tsui, and science geek Emily Graslie, has been good for YouTube, which says more than 1 billion people worldwide visit the site on a monthly basis, up 25 percent from the previous year. Advertisers paid an estimated $4 billion for YouTube ads in 2012, up 60 percent from 2011, according to RBC Capital Markets stock analyst Mark Mahaney. He expects the site to attract $5 billion in ad dollars this year.

But for many of the more than 1 million creators who have signed up for the ad-revenue sharing program since its launch, the payout has been disappointing. The surge in new content—about 72 hours of which is uploaded each minute today vs. every 48 hours in 2011—makes it harder for any one content channel on the site to get noticed. Even worse for creators: Rates that advertisers pay to be on popular videos have fallen by about one-third since last June, according to research firm TubeMogul, which bases its figures on rates for several video sites, including YouTube.

Specifically, the rates for the most lucrative, “pre-roll” video ads that appear right before the featured video dropped from an average of $9.35 per 1,000 views in June of 2012 to $6.33 in March of this year, according to David Burch, TubeMogul’s research director. In some cases, the slide has been even steeper. Brothers Vijay and Antonius Nazareth, whose popular YouTube channel AVbyte attracts about 2 million monthly views to their elaborate parodies of Broadway show songs, saw “a really strong decline” of more than 50 percent in their YouTube earnings in early 2013, “even though we were getting the same [number of] views,” says Vijay Nazareth. Hannah Hart, creator of My Drunk Kitchen (she cooks while tipsy), says that her YouTube earnings started “to kind of teeter off” in mid-2012 after big growth in 2011 and early 2012. YouTube declined to comment on the overall ad-rate drop.

Dave Morgan, founder of Simulmedia, an ad targeting firm for TV, says “most of what’s on YouTube is not what advertisers want,” in terms of both production quality and content. That disconnect has created an “unnatural pricing bubble” that he says is beginning to pop. “There’s an inflated economy out there a little bit,” says Reza Izad, a partner at Collective Digital Studio, a content network that represents about 50 YouTube creators. It’s one of about 300 networks that typically take a cut (50 percent or more in some cases) of their clients’ ad revenue in exchange for helping them cover production costs, obtain paid sponsorships, or secure higher ad rates by selling ads directly to marketers instead of relying on YouTube to parcel out the spots.

One of the biggest networks is Machinima, which claims its videos had 2.2 billion views in March. It’s backed in part by Google, has about 6,500 creators in its stable, and specializes in videos for male gamers between the ages of 18 and 34. Aaron DeBevoise, an executive vice president at the network, says that about one-third of Machinima’s creators earn enough to live off their YouTube careers. Because Machinima negotiates ad rates directly with sponsors—often at a premium rate due to its coveted audience—DeBevoise says that the recent ad-rate drop affected his creators less than those who rely on YouTube directly to procure ads.

Still, the lower ad rates are prompting some popular creators to question whether signing with a network is worth it. Last spring, Ben Vacas stopped posting his Braindeadly commentaries about World of Warcraft after he realized that he had signed a lifetime contract with Machinima that left him unable to switch to another studio. (After a hiatus of several months, he created a new channel where he now posts his videos.) In December, Ray William Johnson, a top YouTube personality with more than 40 million monthly views, criticized his network, Maker Studios, for refusing to let him out of his contract when it demanded a larger share of his ad revenue.

BTIG analyst Rich Greenfield, who covers new media, dismisses such problems as “early growing challenges” and “a few areas of tension” in a rapidly evolving industry. But the way in which those tensions get resolved is likely to have a huge impact on whether the throngs of YouTubers who are in it for the money keep posting their best work on the site - or decide to take their business to YouTube’s rivals.