In Dubai, Services and Exports Drive a New Boom 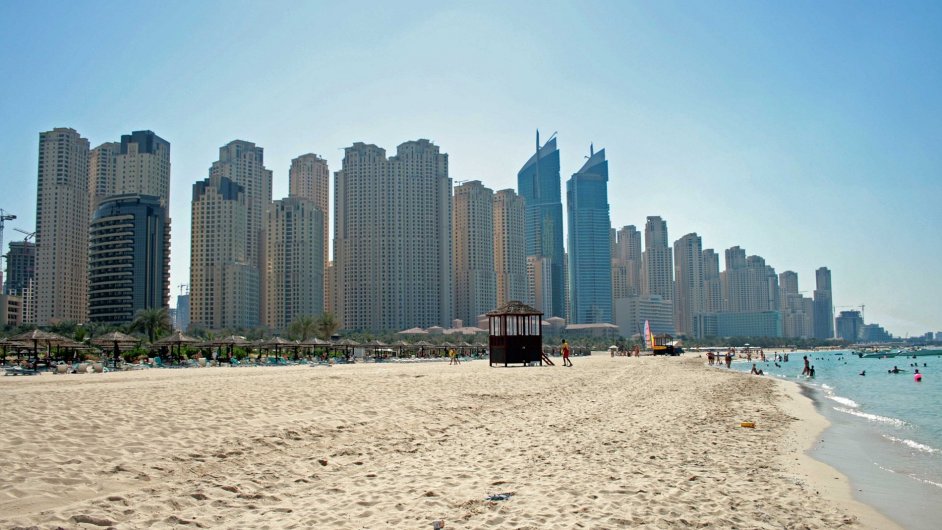 Rewa Zeinati, a freelance writer in Dubai, has noticed more business cards with photos of scantily clad women offering massages piling up on her car windscreen lately. “Sometimes I’m away for 30 minutes and come back to find a stack of them,” says Zeinati. “I’ve definitely seen an increase this year.”

With Dubai’s economy posting its fastest growth since 2007, residents also say it’s harder to find taxis, book restaurants, and get places in private schools for their children. Residential rents climbed about 17 percent last year, while the volume of non-oil trade hit record highs. “Hotel occupancy is up quite significantly and the airport is crazy,” says Abdul Kadir Hussain, chief executive at Mashreq Capital (DIFC), which runs the region’s best-performing fixed-income funds. “If you go to Jebel Ali Free Zone, rents are up and it’s fully occupied. That part of the model is working very well.” The free zone is one of the world’s largest transshipment points for containerized cargo.

The drivers of Dubai’s new growth are services, legal and otherwise, and exports such as electronics, which are shipped out of the free zone. This stress on services and exports suggests any new Dubai boom won’t be a repeat of the debt-fueled real estate bubble that crashed when the global crisis hit in 2008.

In the first half of 2012, construction shrank 2.5 percent from a year earlier while earnings from hotels and restaurants grew 16 percent. The economy expanded 4.3 percent in 2012, according to preliminary estimates. Dubai’s stock index gained 12 percent in the past month, four times the advance of the MSCI Emerging Markets Index. Shares of Emaar Properties, which owns Dubai Mall, the world’s largest, jumped 18 percent. The prices of bonds issued by Emirates airline and the Jebel Ali Free Zone are doing better than ever.

Concerns linger that the economy could overheat again. The Dubai government announced plans in November to build a shopping center even bigger than Dubai Mall. Such mega-projects led the emirate to rack up about $113 billion of debt before the crash. Abu Dhabi, the richest of the seven sheikdoms in the United Arab Emirates, had to engineer a $20 billion bailout of Dubai in 2009. Dubai still has about $40 billion of debt due by the end of next year, according to Bank of America Merrill Lynch.

The UAE’s central bank, based in Abu Dhabi, has capped mortgage lending at 70 percent of a property’s value for Emiratis and 50 percent for foreigners, with even lower lending caps for second mortgages. “Abu Dhabi doesn’t want to bail out Dubai again,” says Emad Mostaque, a strategist with Noah Capital Markets in London. UAE authorities are trying to “keep their economy as stable and bulletproof as possible when they see instability all around them.”

The wave of uprisings in Arab countries has hurt some of the region’s economies. Dubai, which escaped unrest, may be among the beneficiaries. “Political stability makes it a very attractive place for travelers in the region to spend their time and money,” says Khatija Haque, senior economist at lender Emirates NBD.

Finance is playing a smaller part than it did during last decade’s boom; the sector grew only 3.2 percent in the first half of 2012. Still, Dubai plans to boost the industry, partly by launching a sharia finance council that will make sure certain financial products and contracts conform to Islamic law. Such a council will help attract more wealth from the world’s 1.6 billion Muslims.

As recovery takes hold, Mashreq Capital’s Hussain is struggling to find early-morning slots at his favorite golf course. “In the last three winters I could just drive up to my club, get out, and play” he says. This year, after twice being turned away because the course was full, “I decided to call two days before. And they said ‘yeah, but not till 9:30.’ ”

The bottom line: While Dubai is growing again, the emirate still has to pay off $40 billion in debt at the end of next year.