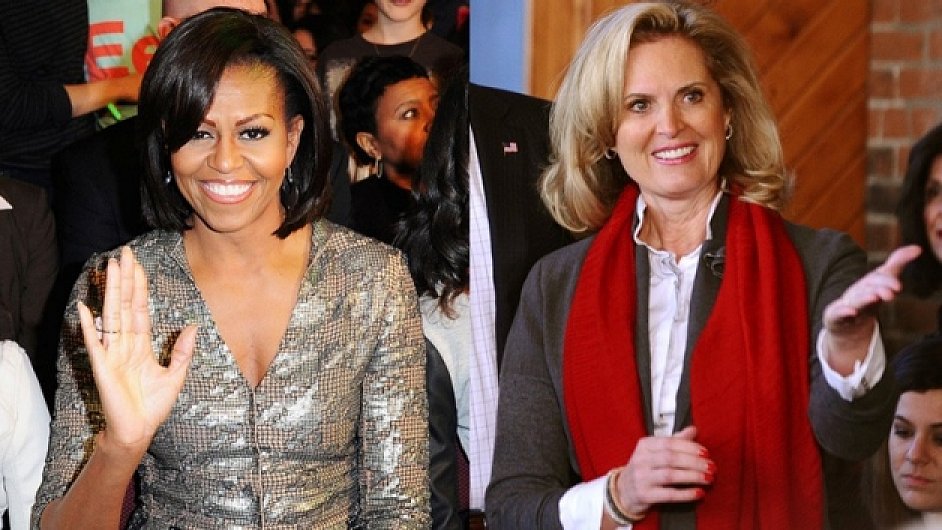 Let’s get the requisite disclaimer out of the way: nobody votes for first lady. Everyone gets that. And most people agree that, in a perfect world - or at the very least a saner one - the spouses of presidential contenders would be spared the gruesome vivisection that has become de rigueur in modern campaigns. Some might even succeed in being ignored altogether.

In this world, however, wives still play a key role in fleshing out the man behind the brand. Voters look to the missus for a peek into a contender’s heart and soul - a glimpse at his core character.

Like the candidates themselves, the spouses bring different strengths and weaknesses to the game. They fuel expectations and satisfy longings, and they often become the repository of voters’ hopes and fears about society writ large. More than a few wind up adorably labeled as their husbands’ “secret weapon.”

It is rare that a presidential race brings us two spouses that embody such contrasting versions of first ladydom - really of American culture more broadly. Michelle Obama: modern, striving, scrappy, edgy, ironic. Ann Romney: traditional, genteel, vulnerable, soothing, earnest. Both women fought fiercely for their husbands, and both proved gifted surrogates - with maybe one or two stumbles along the way.

As first ladies so often do, Michelle Obama blazed into this reelection campaign vastly more popular than her husband. Forget the unsteady, occasionally impolitic naïf of the 2008 race; Michelle has spent the past four years learning the ropes. She picked important but not terribly controversial issues to champion: fighting fat and supporting military families. She made use of nontraditional media outlets like kids’ shows and reality TV. She kept her head down, raised her daughters, rarely responded to criticism, and managed to become a style icon without seeming shallow or overly concerned with appearances. Four years in, Michelle still seems down-to-earth, fiery, and irreverent - all characteristics Americans wish her cool-cat, professorial husband would display more often. Her job now is to drag Barack down off that mountaintop to mingle with the rest of us again.

If not for Bill Clinton’s barn burner, Mrs. Obama’s speech would have been the talk of the Democrats’ nominating convention. Passionate without being abrasive, she made the case for her man - and their cause - far better than he did.

Mrs. Obama hasn’t generated the disenchanted grumbling that her husband has, but she has collected her share of detractors even among former fans. She’s not bold enough in her advocacy. She doesn’t talk about important Issue X. She doesn’t reach out to this group or that one. After four years on the job, she is popular, but also utterly familiar. And we all know what familiarity breeds …

When Michelle hugged the queen of England, traditionalists flinched. When she told a reporter she’d rather be the “Bootylicious” Beyoncé than anyone else in the world, eyebrows were raised. Perhaps her most serious flub, however, was when she jetted off to Spain in the summer of 2010. The high-price-tag trip in the midst of America’s economic turmoil led to her being publicly pilloried as posh and insensitive.

At the end of her husband’s second term, Mrs. Obama will be only 52 - and, after years of supporting her husband, she will have bushels of marital brownie points in the bank. She could return to the private sector - she was, after all, a hospital executive before her husband’s campaign. Or try to convert her considerable popularity into a political future of her own. Like, say, Hillary.

Blonde, beautiful, and smiley, the ladylike Mrs. Romney consistently radiated the warmth and humanity so glaringly absent in her husband. As such, her No. 1 job was to humanize Mitt. On the trail and in media interviews, Ann talked up the nominee’s softer side, his goofy side, his empathetic side. Yeah, everybody knows he once strapped the family dog to the roof of the car. But have you heard about the time he befriended a 14-year-old boy dying of cancer?

Perhaps unsurprisingly, Ann’s finest moment on the trail was her address to the Republican National Convention, at which she had her highest-profile opportunity to tell the nation about the man she loved and the wonderful family they had built together. The speech wasn’t as revelatory as it could have been - and had the unfortunate fate of being overshadowed by Clint Eastwood’s bizarro chair chat - but it was charming and personal and benefited from Mrs. Romney’s visible nervousness.